On the hills above Homer AK

Wednesday and Thursday were two relaxing days seeing the sights bookended by the exciting air flight on Tuesday and Friday’s upcoming water cruise.

Fishing boat design varies by the type of fishing being done

The day started at the Pratt Museum, the local historical society in Homer. While small, it had good displays unique to the Kachemak Bay Area. Coal mining was an early driver of settlement from the Lower 48. Fishing has historically been important, changes and overfishing have made full time commercial fishing a difficult occupation. That is one reason for the growth of fishing tourism.

The area covered by the oil spill from the Exxon Valdez

One display section focused on the Exxon Valdez oil spill. This was an oil tanker which after leaving the oil terminal in Valdez, ran aground in Prince William Sound on Good Friday 1989. 11 million gallons of crude oil were released, creating a monumental environmental crisis. 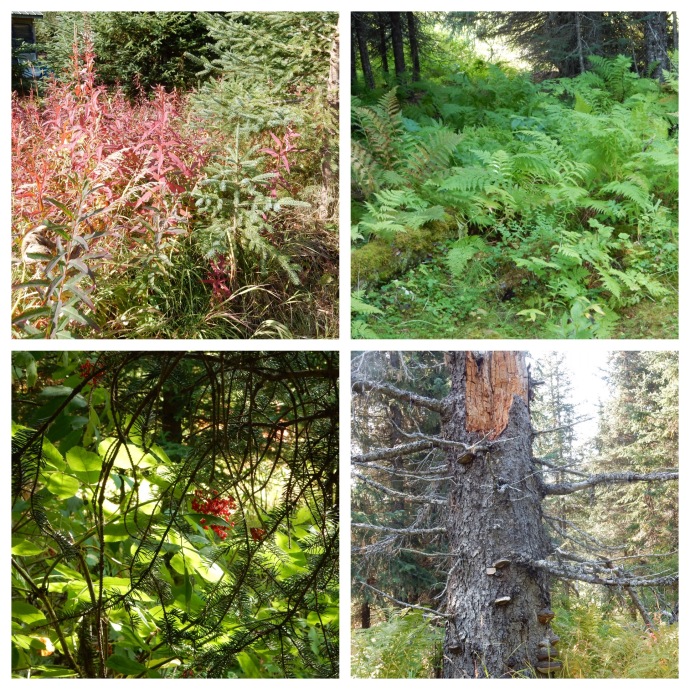 Homer offers numerous hiking options from full day hikes across the bay at Kachhemak State Park to strolls around town. Wednesday we selected more leisurely options. While mountains line the south side of the bay, Homer itself has steep hills behind it on the north. To us, it resembled Duluth MN with its hills and view of Lake Superior.

While deciduous trees are not abundant, there are some. Our expectations of a colorful scene of orange, and red, and yellow is not to be seen. Most of the deciduous trees have brown, falling leaves. The underbrush, however, has been colorful. Fireweed is a common plant here and can carpet a field completely or line the roadside with its 4-6 foot tall stalks. It is coming to the end of its season and depending on locale, may still be flowering or starting to seed. Its fluff is similar to cottonwoods or dandelions and you can walk through a cloud of the fluff as you walk along.

Our hikes did not produce any wildlife viewings. On one, a moose and her calves had been seen in the area and when we came across very fresh moose scat, we decided to take a different path. Female moose are known to be aggressively protective of their young. Views of mountains, sea, and glaciers were pretty much everywhere.

Routine tasks came into play, we had several loads of wash to do. The mud from the walk on Tuesday was on numerous articles of clothing and even the rinsing and washing down on Tuesday only partially got rid of the mud. An excellent halibut dinner capped our Wednesday activities. 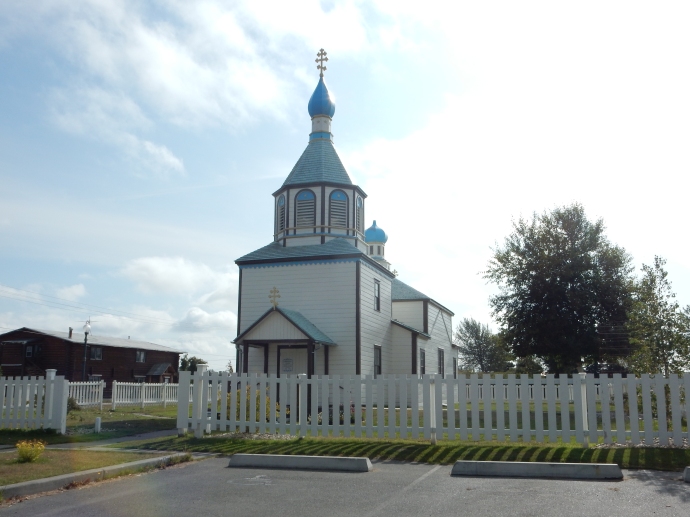 Thursday was time to retrace our steps through the fire zone over to Seward. The people at the Maritime Islands National Wildlife Refuge had recommended a slight detour into the city of Kenai where a herd of caribou frequently hang out. Today they were absent.

Since we were in Kenai, we decided to drive a few more miles north along the Cook Inlet looking for evidence of the oil industry. The Alaska papers had written about BP selling its Cook Inlet oil interests to a smaller firm out of Houston. I had not realized oil was a big deal outside of the North Slope Area. Evidently Cook Inlet is a major player as are several new fields elsewhere in Alaska that are getting attention. Those new fields will require new roads to be built through tundra and wilderness area. I am not going to get into the complicated history of oil, Alaska, tax write-offs, annual payments to residents and environmental concerns but did want to at least see this aspect of Alaska.

Nikiski is about 10 miles north of Kenai and a world away. As you leave Kenai, the roadside changes to an industrial setting with oil related businesses lining the sides, along with a surprising number of small churches. We passed a fertilizer plant, refinery, liquid natural gas processing facility, etc. Oil drilling rigs in the inlet were too far out to be visible to the naked eye although an exhibit at the Kenai Visitor Center said they were there.

Driving along the Sterling Highway in the Swan Lake fire zone

Leaving Nikiski, we continued our journey. Several times today we were stopped and had to wait for pilot cars to lead us through road construction zones. Going through the Swan Lake fire zone was slower this time. On Monday, Labor Day, the pilot car had zipped through. On Thursday, with construction crews active alongside fire containment workers, speeds rarely reached 20 mph. No fire was visible and the wind seemed to keep most of the haze to the south side of the road. But numerous areas not far from the roadside were smoldering and sending out heavy plumes of smoke. We had frequently heard comments predicting that the fires will return next spring. The boggy area tends to allow the fire to burn slow under the surface.

For us, the major attraction in Seward is Kenai Fjords National Park. Once again, much of the park is wilderness and difficult to reach. One accessible area is Exit Glacier just north of Seward. We reached it in time to take a hike to the viewing platform short of the glacier itself. Along the way are the usual signs indicating how the glacier has retreated. As you drive in and then as you hike, you pass signs indicating the glacier was down here in 1815, here in 1899, here in 1929, here in 1951, etc.

Friday the cruise is with Major Marine, a five hour expedition with lunch and views of the glaciers and fjords of Kenai National Park. Five hours seemed long enough, longer ones exist but take you out on rougher seas. After the Florida trip, rougher seas seemed not to be a wise option. We will let you know how this cruise fared.

This site uses Akismet to reduce spam. Learn how your comment data is processed.

Archives-trips start in Jan. 2013–Nov. 2017, some of earliest posts and photos removed to avoid 50% fee increase WordPress has made.